Many Victory class sailing boats were based at Gibraltar.  Like their Portsmouth counterparts, these were all one-time Royal Navy recreational sailing boats.  When I arrived in Gibraltar in 1969 only two remained as Service boats and I was fortunate enough to become the custodian of one named Calypso.  Nobody else wanted this lady.

By this time, the remaining boats of the fleet were owned by local Gibraltarians and were berthed adjacent to the Royal Gibraltar Yacht Club also once controlled by the RN.  Every Saturday afternoon very competitive races were held outside the harbour usually extending past the airport towards the Spanish coast.

I participated in as many of these races as I could, usually with a novice crew (feeble excuse I know) and I was last or nearly last every time.  The regulars were very understanding and sympathetic.  “She’s an old boat and we have local knowledge,” they used to say.  Rubbish!  I just couldn’t sail well enough to win races.  Much to my later embarrassment, this was subsequently confirmed. 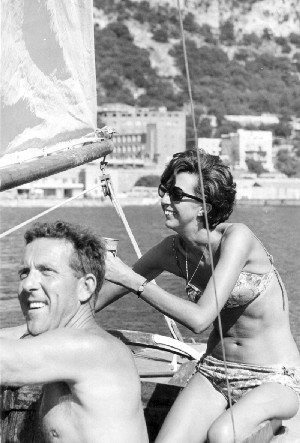 Calypso: no good at racing but she had her points...

It was during one of the weekly races on a particularly blustery day that one of the Victories shipped so much water that its crew were unable to bail it out fast enough.  Upon entering harbour the winds were very fluky, spiralling down and around that vast chunk of rock.  The sea was also very turbulent.

This was the precarious situation that befell the nearly topped-up Victory.  She gybed, broached to, heaved over and then went down like a stone.  I would imagine that buoyancy bags have much improved over the years since then.

For the rest of the weekend, this sunken vessel provided a great deal of interest to other boat owners.  She looked quite uncanny; upright and gently rocking some 50 feet down on the firm seabed.

On the Monday morning, the dockyard received a request for salvage assistance which was forwarded to my department for costing and appropriate action.  The operation would require the use of a mooring vessel, crew and divers.  The total cost was astronomical.

By sheer good fortune, a visiting frigate had sent a signal requesting the assistance of a diving supervisor to carry out training in the harbour so off we went a salvaging.

After a quick survey of the sunken boat, the team gathered all the equipment they thought necessary to attempt a lifting operation.  This included a 20-man inflatable life raft and a diving boat borrowed for the occasion.  It came as a bit of a surprise to discover that a deflated life raft has an enormous amount of positive buoyancy.  With divers down below hauling on lines secured to the raft and a diver straddling the beast, it still refused to submerge.  Heavy weights were ordered and collected.  Once attached, the raft gently sank and the divers below guided it straight into the hull of the casualty.  I well remember the difficulty I experienced in lashing the raft into position and would recommend spreading a net over the object and securing its edges.

To avoid using the rescue boat’s engine, another power boat towed us very slowly to South Mole.  When alongside, the divers returned to the water and secured slings from the jetty crane.  The submerged Victory was carefully hoisted and drained.  Once afloat, she looked none the worse for her experience; perhaps a little cleaner.

The Victory’s owner, a Mr Mifsud, was overjoyed and more than happy to provide dinner for two and several crates of beer to the members of the salvage team.

When my happy days in Gibraltar came to an end I handed my Victory Calypso over to a newly arrived staff officer, Cdr Peter Johnson-Hall who was a very keen sailor, with apologies for her drawbacks and lousy racing capabilities.

On my return to Gib the following season in the good ship Fearless, I discovered that Peter was not only winning every weekly race in Calypso but was also dictating the policy and conduct of races in the Royal Gibraltar Yacht Club.  I rest my case. 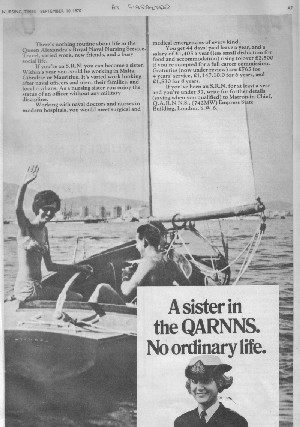 Nursing Times: Another one of Doug and his 'sister'