HMS Vernon before the excavators came 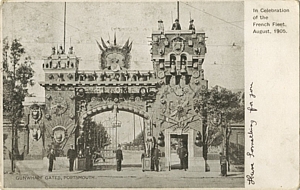 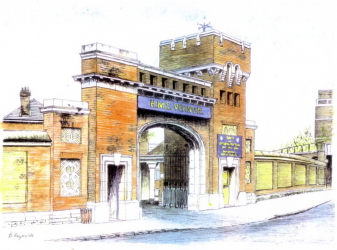 The last of four ships to bear the name HMS Vernon was a fourth rate 50-gun 'Symondite' frigate that saw active service in home waters, the Americas and the East Indies between 1832 and 1848.  She was then laid up in Chatham Dockyard until emerging in 1867 for use as a floating coaling jetty. 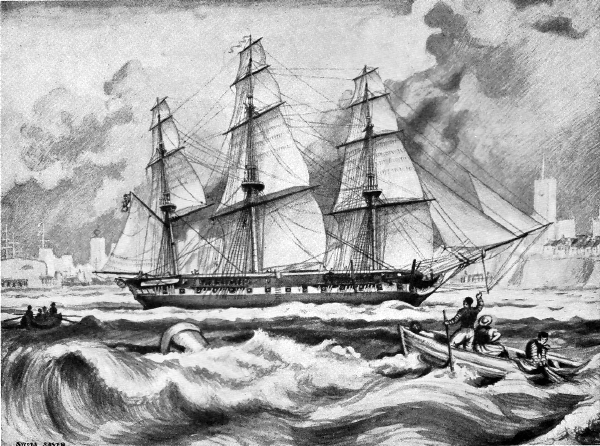 She was actually named after the Hon George Vernon, a friend of Capt William Symonds who had designed her, but her name became synonymous with one of his ancestors, Admiral Edward Vernon (1684-1757) nicknamed 'Old Grog'.  On 22 Nov 1739, he achieved fame by commanding a squadron of six ships which captured the Central American coastal fortress of Portobello from the Spanish. Although he suffered a later defeat at Cartagena, he was elected to Parliament on the basis of his previous success.  He was known as ‘Old Grog,’ reputedly because of his penchant for wearing a cloak made of grogram (from the French ‘gros grain’), a coarse fabric of silk or mohair and wool.  In 1740, he had the sailors’ neat rum ration diluted with water, a mixture known ever afterwards as ‘grog.’ 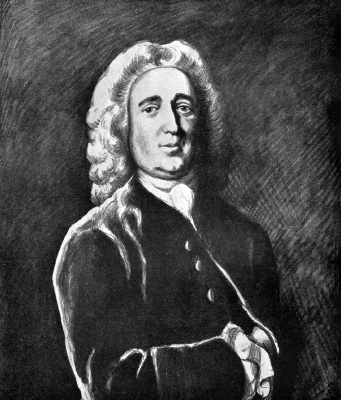 Successive HMS Vernons adopted the same motto as the town of Vernon-sur-Seine in France where the Vernon family had originated: "Vernon Semper Viret".  The literal translation of this is "Vernon Forever Green" but a more realistic translation would be "Vernon Will Always Flourish". 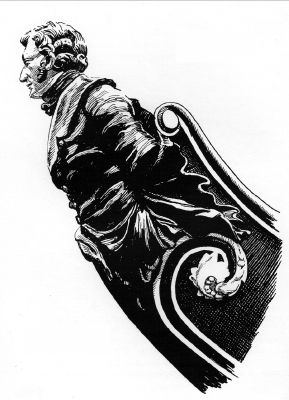 Figurehead of the fourth HMS Vernon

In 1872 the fourth HMS Vernon was given a new lease of life as a hulk anchored in Fountain Lake at Portsmouth.  Together with the 104 gun Excellent (formerly Queen Charlotte) and the 84 gun Calcutta, she helped constitute HMS Excellent, the Royal Navy's floating Gunnery School but specifically for torpedo and mining training.  From 1874 to 1923 Vesuvius, a gunboat of 250 tons, became Vernon's Whitehead Experimental Tender for the conduct of torpedo trials. 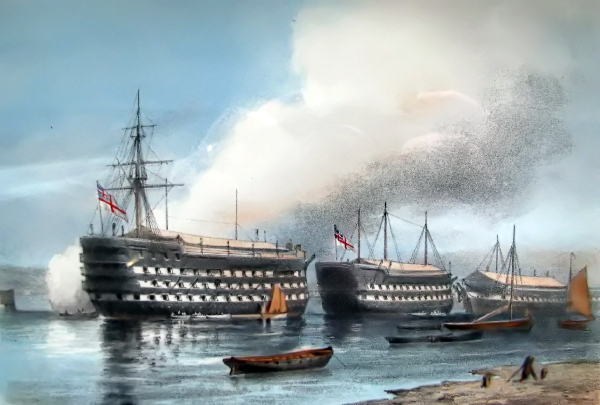 On 26 April 1876 the hulk of Vernon together with those of the former 26 gun screw frigate Ariadne (providing accommodation) and the lighter Florence Nightingale were commissioned as HMS Vernon to become the home of the Royal Navy's Torpedo Branch at Portsmouth, independent of HMS Excellent.  The hulk of the fourth rate frigate Actaeon was added in October 1879 and used as a workshop.

On 23 April 1895, the hulks of Vernon (formerly Donegal), Ariadne and Actaeon (formerly Vernon) were moved from Fountain Lake to Portchester Creek in Portsmouth Harbour.

In 1903, the accommodation hulk Ariadne was replaced with the hulk of the old 121 gun three-decker Marlborough which became VERNON II.  She was connected by bridges to Actaeon (VERNON IV) and the old Donegal, now Vernon (VERNON I). 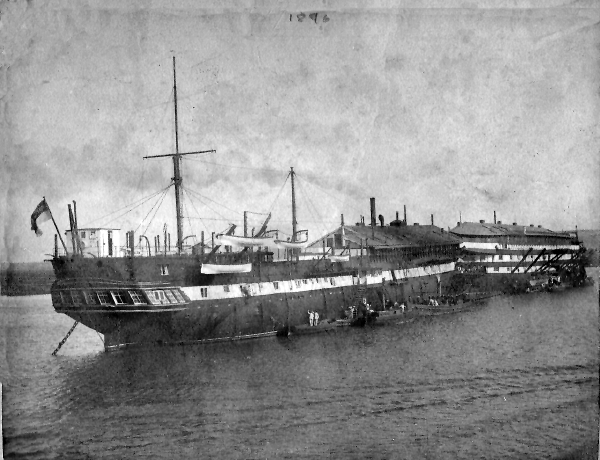 In 1904 the pioneer ironclad Warrior (now on show in Portsmouth as HMS Warrior 1860) arrived as a floating workshop, power plant and wireless telegraphy school and became VERNON III. 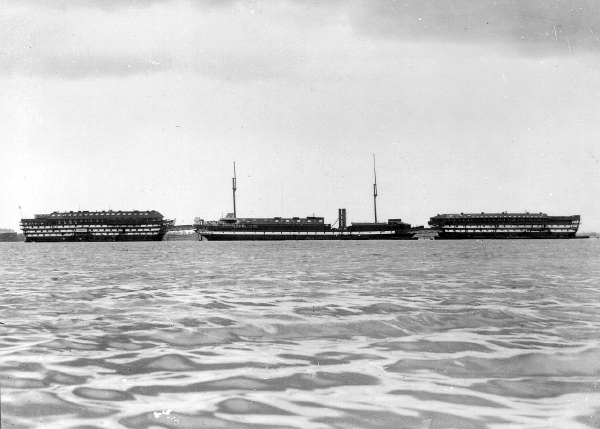 Above and below: HMS Vernon comprising Marlborough (VERNON II), Warrior (VERNON III) and Donegal (VERNON I) in Portchester Creek 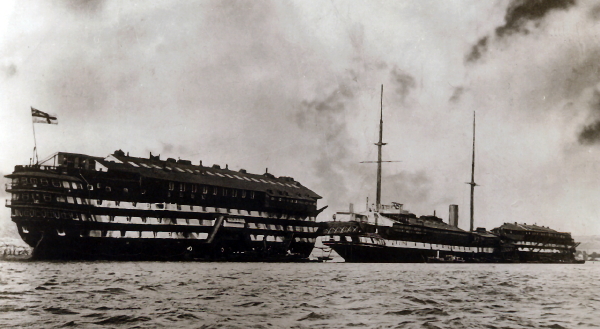 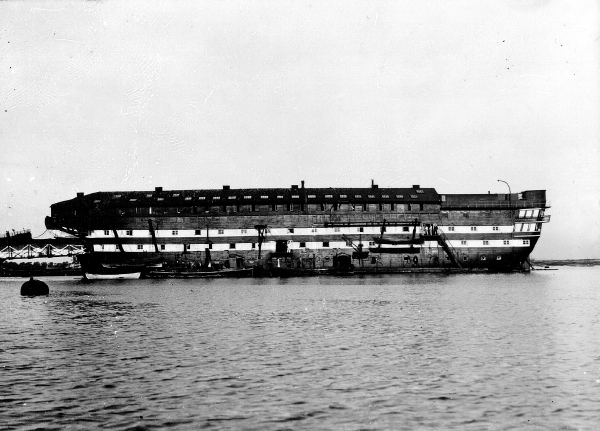 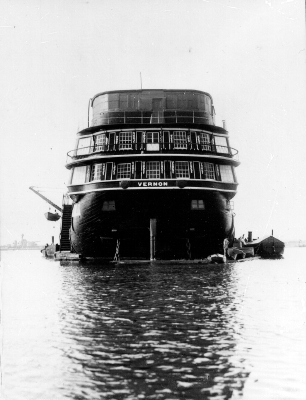 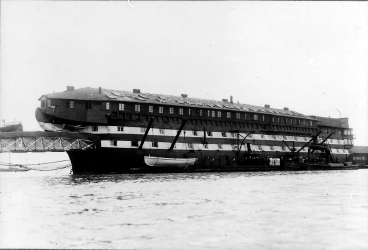 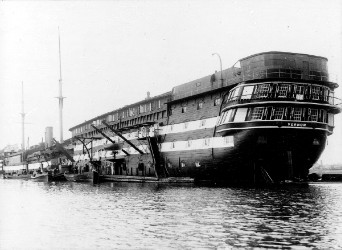 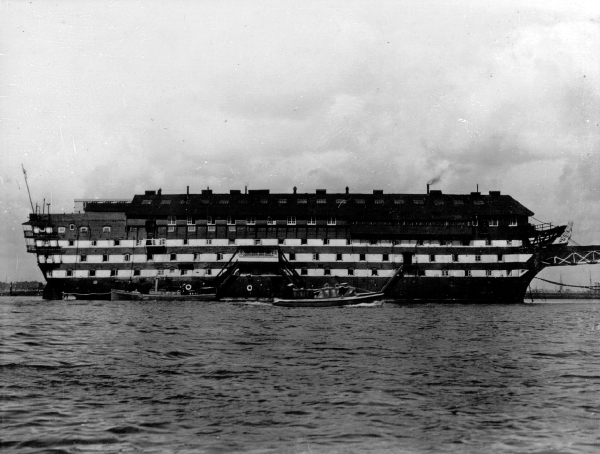 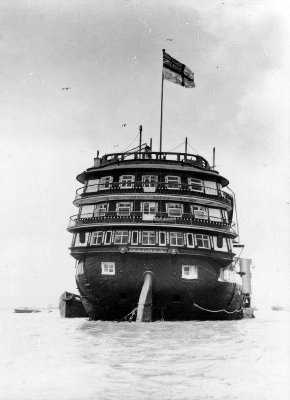 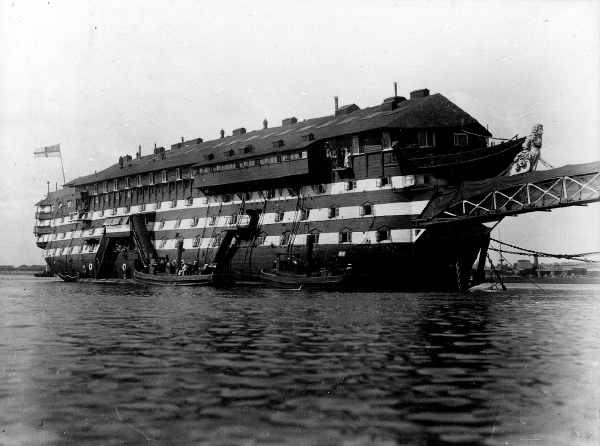 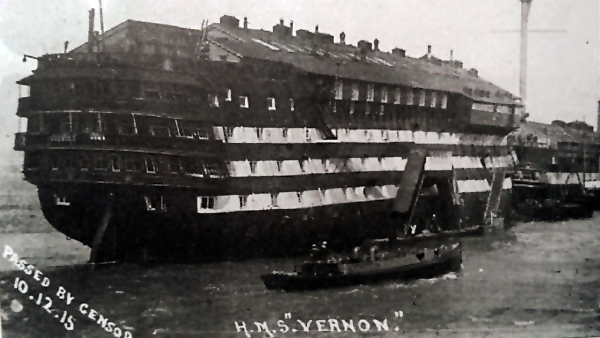 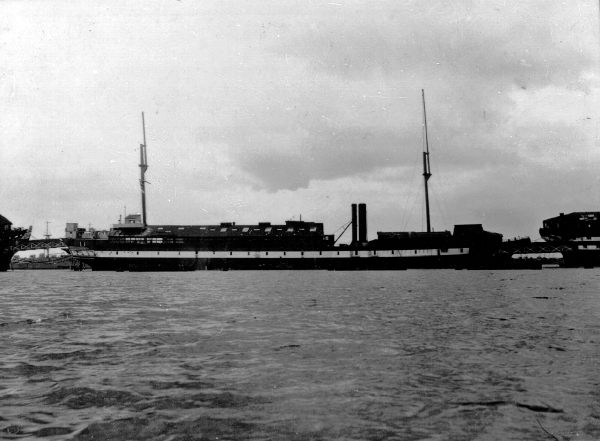 Above and below: Warrior (VERNON III) 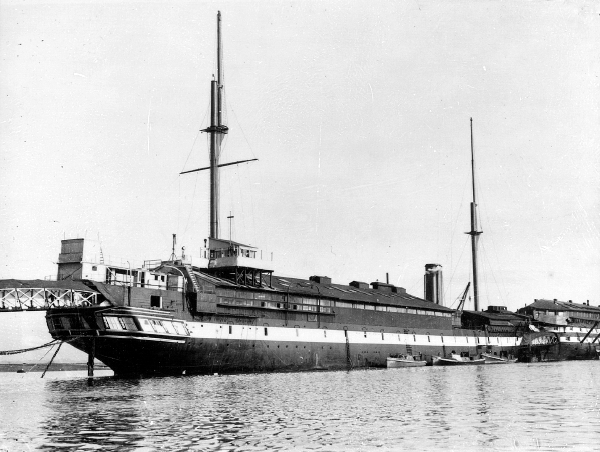 For conformity, Actaeon (the original Vernon) became VERNON IV.  She was moored separately abreast VERNON II, on the other side of Portchester Creek, and used as an instructional ship and floating workshop. 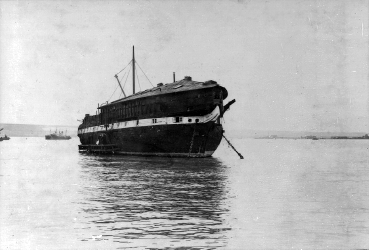 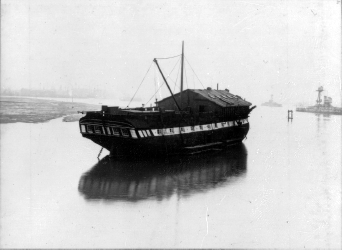 In 1904, Ariadne (ex-VERNON II) was sent to Sheerness where, confusingly, she was renamed Actaeon on 6 June 1905 or 1906 (depending on source) and became the nucleus of a new torpedo school.  She was eventually sold on 11 December 1922. 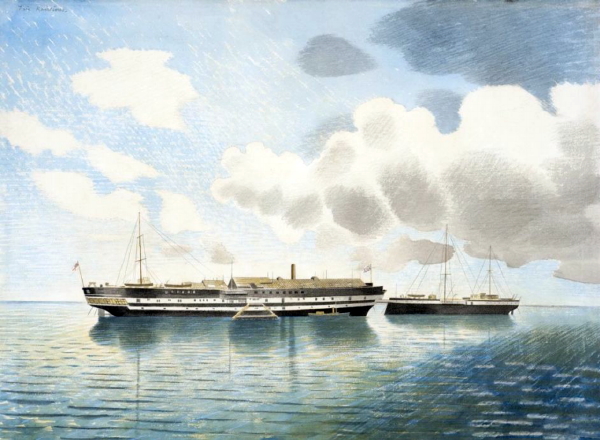 In 1916, the second class cruiser Forte was moored alongside Warrior (VERNON III) for use as offices and extra living accommodation.  Between 1916 and 1923, various submarines and a barrage vessel were attached to the School to assist in providing electrical power.

During the First World War, work at HMS Vernon concentrated on torpedo trials and training and the research and development of anti-submarine devices and training in their use as well as mines and ships' electrics.

On 1 October 1923, HMS Vernon (or ‘The Vernon’ as it came to be known) was established ashore at Portsmouth on the site of the old Gunwharf (now the development known as Gunwharf Quays) and Mining, Whitehead [Torpedo] and Electrical departments were formed.  The original 50 gun frigate HMS Vernon, since called Actaeon (VERNON IV), was sold and towed to Castle's shipbreaking Yard at Woolwich to be scrapped.  Similarly Marlborough (VERNON II) was sold for scrap in October 1924 but capsized off Osea Island in the Blackwater estuary on 28 November 1924 while being towed to the shipbreakers.  Donegal (VERNON I) was sold on 18 May 1925 to Pounds shipbreakers in Portsmouth. 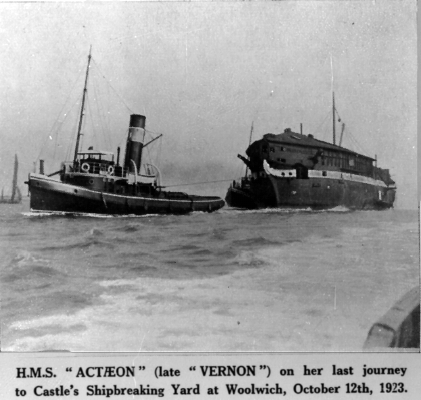 The original names of the Vernon hulks were adopted for buildings in the shore base. 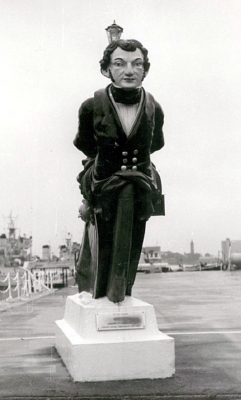 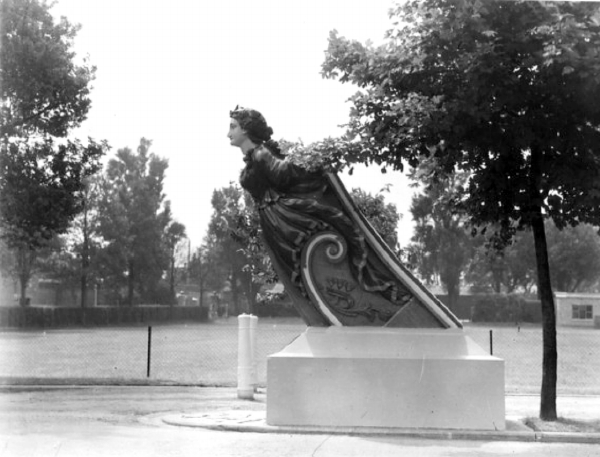 HMS Ariadne's figurehead at HMS Vernon in the 1980s 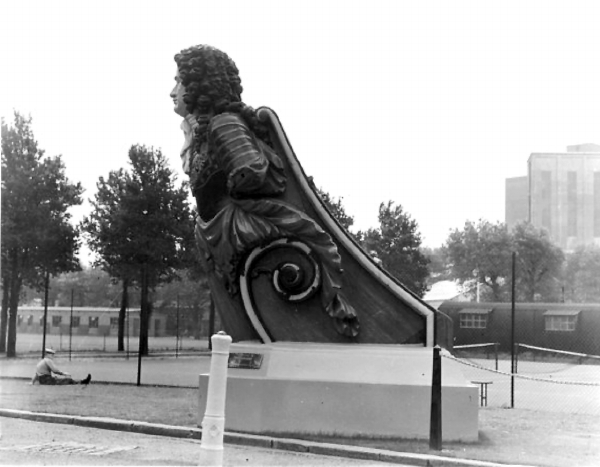 HMS Marlborough figurehead at HMS Vernon in the 1980s 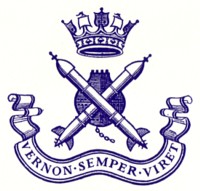 During the Second World War, HMS Vernon became responsible for mine disposal and mine countermeasures.  Her officers and scientific staff achieved several coups involving the capture of mines and the development of countermeasures.  One of the earliest of these was the rendering safe and recovery of the first German magnetic mine (Type GA) at Shoeburyness on 23 November 1939.  For this deed, Cdr John Ouvry was decorated with the DSO by King George VI at a ceremony on HMS Vernon’s parade ground on 19 December 1939.  Others decorated at the same time for this, and other tasks where mines were rendered safe for recovery and examination, were Lt Cdr Roger Lewis (DSO), Lt J E M Glenny (DSC), CPO C E Baldwin (DSM) and AB A L Vearncombe (DSM).  Of particular note, these were the first Royal Naval decorations of the war.

In June 1940, the first attempt to render safe a ground mine by divers was made in Poole Harbour, Dorset.  A diving unit from HMS Excellent, supported by divers trained in Rendering Mines Safe (RMS) techniques from HMS Vernon, successfully removed the fuze from a Type GC mine underwater although the mine exploded as it was towed inshore.  For his central role in this task, Able Seaman Diver R G Tawn was subsequently awarded the DSM.  On discovering the skill of HMS Vernon’s mine technicians, the Germans placed booby traps in some mines.  One was fitted with a small explosive charge that detonated when the mine was stripped in the mining shed at HMS Vernon on 6 August 1940 causing the deaths of Commissioned Gunner (T) Reginald A. Cook, PO Cecil H. Fletcher, AB William B. Croake, AB William J. Stearns and AB Alfred E. Stevens and serious injuries to other personnel.  Following this incident, mines were stripped and examined at a disused chalk quarry at nearby Buriton which was nick-named HMS Mirtle (short for Mine Investigation Range).

Various sections of HMS Vernon were dispersed to sites throughout the country following heavy air raids on Portsmouth, one of which demolished Dido Building and killed 100 people in a single night.  On 3 May 1941, the main part of HMS Vernon was evacuated to Roedean Girls’ School at Brighton (HMS Vernon(R)) where bell pushes on the dormitory bulkhead were purportedly labelled ‘Ring for Mistress”. Other sites included Havant, Purbrook, West Leigh, Stokes Bay, Hove, Dartmouth/Brixham, Helensburgh, Edinburgh and Port Edgar. Although many naval divers were trained at HMS Vernon in Rendering Mines Safe (RMS) procedures as members of the Mine Recovery Section during the Second World War, it was not until 1 October 1944 that responsibility for naval diving passed from the Gunnery Branch, still based at HMS Excellent, to the Torpedo Branch based at HMS Vernon.  This brought Minewarfare (both mining and mine countermeasures) and Diving under the same organisation for the first time.

Owing to the wartime evacuation measures, a new diving school and experimental station known as Vernon(D) was set up at Brixham in Devon on 27 Oct 1944.  The (D) referred to Dartmouth where administrative support was stationed.  The RN Superintendent of Diving, responsible since 1942 for the Admiralty Experimental Diving Unit (AEDU) based at Siebe Gorman and Co, Tolworth, Surrey and for the coordination of diving training in addition to research and development, moved to Brixham together with HMS Tedworth, the RN Deep Diving Tender.  Almost immediately, Vernon(D) became overwhelmingly occupied with the training and support of ‘P’ (Port Clearance) Parties (Naval Parties 1571-1575 and 3006) until 1 October 1945 when the organisation moved back to HMS Vernon proper at Portsmouth.

On 10 October 1946, the Torpedo Branch divested its Electrical responsibilities to the recently formed Electrical Branch and merged with the Anti-Submarine Branch (formerly based at HMS Osprey at Portland) to form the Torpedo and Anti-Submarine (TAS) Branch.  Hence, the TAS Branch assumed responsibility for naval diving.  HMS Vernon remained the home of the TAS Branch at Portsmouth until the Summer of 1974 when it was devolved to HMS Dryad at nearby Southwick prior to the formation of the Operations Branch in early 1975. 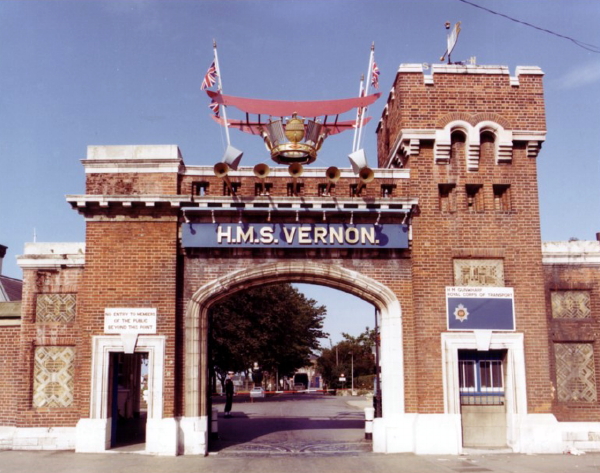 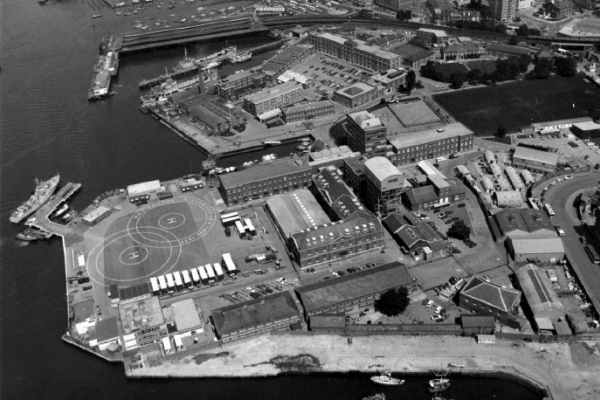 Training in Diving, Demolitions and Minewarfare, along with Naval Control of Shipping and, for a time, Seamanship, continued on the site of HMS Vernon at Portsmouth even after it ceased to be an independent command on 31 March 1986 and was renamed HMS Nelson (Vernon Site).  In 1987, the establishment was renamed HMS Nelson (Gunwharf) and briefly became Headquarters for the Commandant General Royal Marines before his move to permanent accommodation at HMS Excellent on Whale Island.  In November 1995, Minewarfare training was shifted to the School of Maritime Operations (SMOPS) HMS Dryad at nearby Southwick and subsequently to the Minewarfare Operational Training Centre at the Maritime Warfare School in HMS Collingwood across the harbour from Portsmouth.  Diving training, together with the Superintendent of Diving, the Fleet Diving Headquarters, the Fleet Clearance Diving Team and the Portsmouth Area Clearance Diving Team moved into new accommodation on Horsea Island in Portsmouth Harbour on 1 September 1995 and the old Vernon establishment closed its gates for the last time on 1 April 1996.

Back to HMS Vernon