For much of her time, HMS Laleston was the diving training tender attached to HMS Vernon, now the trendy waterside restaurant area, shopping complex, marina and residential development known as Gunwharf Quays.  This role meant operating off the west coast of Scotland in the winter and out of Falmouth in the summer.  Between our long spells of detached duty we spent periods at our base where, for a few precious weeks, married members of the ship’s company were able to renew acquaintance with their wives and families before disappearing again.  During these base port periods, we were fair game for any sea-going duties in the Portsmouth area.

Sometimes we were tasked as the ‘driving education’ platform for Mine Countermeasures Course (General) (MCMG) COs (desig); i.e. officers who had been appointed to take Command of MCMVs and other minor war vessels.  We fitted outsized ‘L plates’ on the funnel and conducted circuits of berths and buoys assigned to us by the Queen’s Harbourmaster (QHM), variously clenching our teeth, biting our tongues and digging our nails into our palms as our charges practiced their ship-handling skills with differing degrees of success.  Being Mirrlees-powered, Laleston had little stern power on which to rely and there was always a long heart-stopping delay between giving an engine order and experiencing any sort of response from the screws.  This pause meant that student drivers had to learn to anticipate any required engine movement by 10 to 12 seconds.  Some managed it; others didn’t.

It is to the credit of my Captains at the time that they were able to wait so long before stepping in with a calm “I have the ship” and averting probable catastrophe as we bore down on a jetty at a rate of knots and the berthing party scattered in panic.  Our open bridge provided a wonderfully panoramic view around us so there was no excuse for making a sternboard into the Gosport ferry although this was attempted surprisingly often.  As with all MCMG and career course training, I was always pleasantly surprised to visit ships a few weeks later and see how confident and adept former students, both officers and ratings, had become so soon after taking over their jobs and being left to get on with it.

Other tasks were far less onerous.  In 1973 we stood in for the South Wales Division RNR tender HMS St David to accompany the Bristol Division RNR tender HMS Venturer and ferry their WRNRs across the Channel.  It might have been the other way around in which case I’m sure some member will say.  The object of the exercise was for them to visit their French opposite numbers in ACORAM (Association Centrale des Officiers de Réserve de l'Armée de Mer) for the weekend.  The WRNRs embarked with their respective male COs at HMS Vernon and off we went, conducting passage exercises such as OOW manoeuvres, light line transfers and steering gear breakdowns on the way.

I can’t remember if our destination was St Malo, Le Havre or Cherbourg.  Again, I expect someone else can fill in the details.  Each member of the ship’s company was doubled up (so to speak) with a WRNR counterpart at his part of ship.  It was a most peculiar experience in those days to hear a shrill young female voice at the other end of the voice-pipe requesting permission to take over the wheel.  Of course, the WRNR junior rates were entitled to their own ration of three tins of beer while their seniors enjoyed the hospitality of the wardroom bar and senior rates’ mess.  I suspect the consumption of this alcohol, combined with the lulling effect of being at sea in close proximity to the burly masculinity of our own sailors, raised the phemerone level considerably and enhanced many libidos.  Perhaps the salt air and dieso fumes came into play too.  Anyway, chaperoning became a bit of a problem; it is surprising how many odd nooks and crannies just large enough for two people can be found in a Ton.  Several close relationships were struck up and continued ashore throughout the weekend after we had berthed outboard of the RNR ship at our French destination. 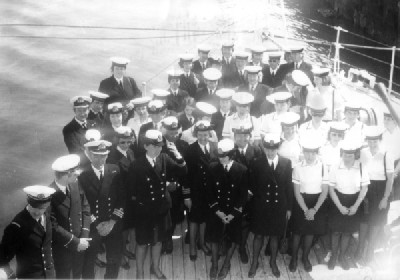 A Forecastle of Femininity

I was Officer of the Day during the overnight visit and remember talking to the quartermaster during the middle watch.  He said his RNR counterpart in the other ship had told him he was building a garage.  Our QM had said that was nice; he only had a driveway himself.  It transpired that the RNR QM wasn’t talking so much about a garage as a filling station; in fact he already owned a chain of five of them!

On other occasions, we took members of the Portsmouth Retired Naval Officer’s Association (PRNOA) for their annual jaunt across the Channel.  I well remember one elderly fellow being hoisted on board in his wheel chair and wonder what today’s Health & Safety people would have said about it.  I organised a cash bar in the capacious Divers’ changing room-cum-classroom aft and soon pink gins and horses’ necks (the duty free price for a tot in those days was 3 new pence) were disappearing like there was no tomorrow.  The sea was a bit lumpy and one chap was just telling me he’d been a convoy commodore during WW II and that he hadn’t been sea-sick since 1938 when he suddenly disappeared for an intimate conversation with King Neptune over the transom.

By the time we reached our French destination, the wardroom bar profits had risen significantly and several PRNOA members were somewhat the worse for wear.  Did this slow them down at all?  No way.  As soon as we berthed, they all recovered their composure as if by magic and set off on a postcard run with never a backward glance.  Later in the day, they tumbled back carrying a variety of rabbits and singing at the top of their voices.  The day had taken its toll, however, and the passage back to Portsmouth was far quieter than the outbound leg.

THE ANGELS OF ROEDEAN

As Doug Barlow has already described in his dit ‘The Angels have Landed’, HMS Vernon was visited each year by students from Roedean School for girls.  This was to commemorate the affiliation established during WW II when part of Vernon had been evacuated to Roedean.  Such occasions were marked by an ‘Away all Boats’ and Laleston played her part whenever she was available.  One year, the ship’s company was agog because we had been told we would be taking out the school’s orchestra for the day.  Visions of skimpily dressed St Trinians type Sixth Form lovelies passed through everyone’s mind.

On the morning of the event, excitement on board had reached a crescendo.  A minibus arrived on the jetty and out stepped… a crocodile of little girls.  It was somewhat disappointing to learn so late in the day that we had been assigned the junior section of the orchestra comprising girls aged 8 to 13.  The more mature and certainly more pneumatic members of the orchestra’s senior section, aged 14 to 18, had been assigned to the tender mercies of Vernon’s Heads of Departments who promptly split them up and took them out in anything that floated.  Despite this, Laleston had a pleasant day cruising around the Solent but her berthing back alongside at Vernon was delayed by a cultural ‘happening’ in the Creek.  This is the subject of Doug’s dit so I will invite you to read his words for yourself.