In 1939 I worked for a very large firm, STC (Standard Telephones & Cable Co.) where most men between 18 and 20 years of age were being called up for the Army.  It seemed the more experienced men between 20 and 30 were reserved for a while.  I was lucky.  I got into the Navy on 12 February 1941 being 18 years and three months old.  I went to where I did a trade test to become an electrical rating.  The test consisted of cable-jointing (married joints) with a plumbed lead sheath, wiring a mock-up panel and fault-finding on another panel.  Fortunately I passed.  If I hadn't, I would have been made a seaman or a stoker (a terrible thought).  I then had a three-month training course consisting of rifle drills, marching, seamanship, knots and ships' electrics

There were about 40 men in my class and, on completion of the course, an old Chief Petty Officer (well, old to me then - about 60) separated us into two groups.  He then said to one group, "You will be General Service, i.e. anything from frigates to battleships with as your home port."  He then said to my group, "You will go to the Royal Naval Patrol Service (RNPS) based at , mainly for minesweepers."  I asked him, "Is that good, Chief?"  He replied, "You won't effing last long!"

I arrived at and was billeted in a private house, as most of us were, to await a draft.  After two weeks, I was sent to a sweeper (Motor Minesweeper MMS 41) in Lowestoft docks which was fortunate as I didn't have a train journey to somewhere around to pick up a ship.  I had about two hours tuition with an electrics officer on how to operate and control the magnetic sweeping gear and the acoustic hammer.  The next day we were off into the to sweep our way to Sheerness accompanied by a partner ship.  Somewhere off Harwich we blew up our first mine and the crew gave me a big cheer.  We were based at a small port, Queenborough (Minesweeping HQ & depot ship HMS St Tudno), which is about two miles up the River Medway from Sheerness. 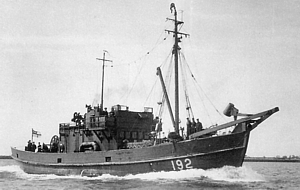 We worked out of Queenborough for 18 months, generally doing four days out and two in, which consisted of up to Harwich and back, and round to Dover and back.  At Queenborough there was a shore maintenance base, a NAAFI and a beer canteen one could use in the evening.  We purchased most of our food at the NAAFI as we got an allowance of two shillings per day to do our own catering.  I took on the job of catering as the cook was not interested in buying the food; only cooking it and this he hated. 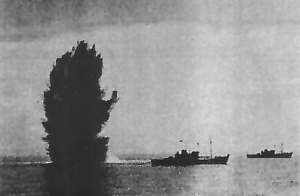 Mine explosion from Ernest's ship (MMS 41)

During that spell at Queenborough, we destroyed a large number of mines [over a hundred] but even so a number of merchant ships was sunk, especially in the Thames Estuary.  You couldn't get them all.  Also during that spell at Queenborough I was honoured with a bronze oak leaf (Mention in Despatches) for the following incident.  Invariably when a mine was triggered, it blew up either side of the towed cable but one evening while coming down the east coast, we got one immediately under the cable.  I was on deck at the time and I saw the cable loop up into the air with the column of water that occurs when you blow a mine.  The Chief Engineer called me to get down in the engine room and look at my control panel because he thought that there was something unusual on the ammeter.  There certainly was.  It was reading over 4,000 amps instead of the normal 3,000 amps.  It was then obvious that the cable had been stripped of its insulation causing a short circuit.I reported to the Skipper that we had damaged the cable with our last mine so we couldn't continue sweeping.  He said that it was out of the question to pack up as there was a convoy due in a few hours time.  I told him that I hadn’t got the jointing equipment - very large brass lugs and sweating gear like they use at the shore maintenance base - but I was willing to have a go at doing a joint by hand, to which he agreed.The cable was pulled aboard until we got to the damaged section, and there was about two hours of daylight left in which I thought I could just about manage.I cut the cable completely through and stripped back the insulation about four feet along each piece.  I then proceeded to do a married joint of about 300 strands of wire.

After about two hours I was nowhere near finished so the seamen rigged up a sailcloth cover with a light inside for me to carry on.  I continued and finally finished the intertwining of hundreds of strands; for good measure I fitted four jubilee clips.  Then finally I wrapped the whole length of the bare joint with yards and yards of pure rubber and covered it completely with linen tape, then applied heat with a blowlamp to vulcanise the rubber. The cable was put back into the sea after three hours, all switched on and working again.  The remarkable thing is that we had only gone about three miles before we blew up a mine.  The Skipper was thrilled to bits.  Apparently he got in touch with the commander of that following convoy the next day and told him what had happened.  We assume it was that commander who got in touch with the Admiralty to recommend some recognition for me.  In due course I received a ‘Mentioned in Despatches’ bronze oak leaf. 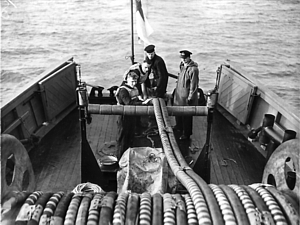 from a Motor Minesweeper

[By Webmaster: Readers may also be interested in this article on the BBC website about the late Lt Cdr Eric Garside DSC VRD RNVR, the first Commanding Officer of MMS 41.]

In December 1942 I was called back to and was given a draft to ‘somewhere abroad’ (they wouldn’t tell you where).  I picked up a troopship, the P&O liner Stratheden, which left Gourock in carrying 4,000 soldiers and just about 100 sailors (about four sweeper crews).  Our first stop was , then finally in .  After a couple of weeks in we had a very long train journey to where we commissioned our sweepers.  I served in the converted Norwegian whaler Shooting Star [ex-Vestfjord VI].  From there, we had a long sail to in where we were based for nearly two years, sweeping the Indian Ocean down as far as the .  Then we spent a few months around and up the east coast of .  I often saw troopships and landing craft heading for , etc.  Poor souls, I thought. 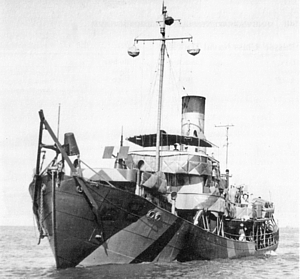 Eventually we were sent back to for a ship home.  The ship was the light cruiser HMS Enterprise.  What a shock to the system that was, especially after a minesweeper with a crew of about 20.  There must have been something like 800 crew on board, and we had to dress and act like proper sailors.We finally landed at , the ship’s home port, and I was transferred to my own headquarters at .  From there I got a draft to the Steam Gunboat HMS Grey Goose (SGB 9)) based at Oban in .  Peter Scott was superseded as her CO just as I arrived.

[By Webmaster: In 1944, the Steam Gunboats were converted as fast minesweepers.  They were all sold soon after the war except Grey Goose which remained in service as a trials vessel until sold in the late 1950s.  Lt Cdr Peter Scott RN was the son of Scott of the Antarctic (Captain Robert Falcon Scott Royal Navy) and later became Sir Peter Scott, the famous broadcaster, naturalist and painter.] 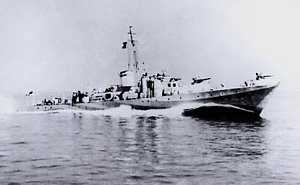 In May 1946 I was finally sent back to for demob.  I was kitted out with a suit, overcoat, shoes, socks and a pair of braces, then home sweet home.  That is how I won the war; well, I’ll admit I was helped by Admiral Mountbatten and Field Marshall Montgomery.

P.S. I did actually meet Mountbatten and held his heavily gold-braided cap when he gave us a pep talk in a shed in .

Once under way and the Skipper had given the order ‘Out Sweep’, four seamen would lower the cable into the sea over rollers at the stern while I got the 54kW generator running and set charging the batteries at 200 amps.  When the cable was fully streamed, all 547 yards of it, this left me to connect the very large brass cable lugs to terminals in a steel connection box aft.Once this was done, the next part of the procedure was to switch on the Venner Time Control in the wheelhouse.  It wasn’t quite as straightforward as that because you had to get synchronised with your partner ship so that both ships were sending out the magnetic field of the same polarity.

Before we left harbour, my opposite number in the partner ship and I would agree on who would do the synchronising.  Let’s say it was me to do this.  I would signal the partner to switch on and start pulsing.  Their pulse indication lights would come on for five seconds in every 30 seconds; one light at the forward location meant that they were putting a positive feed out through the short leg which produced a north magnetic field between the ships.  Their next pulse would show me two lights; one at the forward location and one aft, indicating a change of polarity.Now I had to watch very carefully for when their single light came on, i.e. forward location, and when it went off.  When it went off I would immediately switch on the Venner time clock again.  Then both ships should have been synchronised but sometimes I may have been a bit slow on switching on again and perhaps lost a second.  If this happened, I had to got through the operation again until I got it spot on.  The system then carried on for the rest of the sweeping session.

With regard to acoustic sweeping (this was for mines that went off from the noise of a ship’s engine), the large bucket-like steel container housing the ‘Kango’ was lowered over the bow on an ‘A’ frame and made fast with steel cables.  This was carried out prior to launching the magnetic minesweeping cable.

[Postscript: Sadly, Ernest died peacefully in his garden on 28 May 2009, just over a year after sending these memories.]