(First published in the March 2001 (No 89) issue of Ton Talk, the magazine of the Ton Class Association, and subsequently in the November 2006 (Vol 94 No 4) issue of the Naval Review)

This is a story about a pilgrimage made by three inshore minesweepers from HMS Vernon to Vernon-sur-Seine, which, as its name implies, is located on the River Seine in the departement (county) of Eure halfway between Rouen and Paris.  It was named Vernon around 900 AD, possibly on account of its trees and greenery from the French ‘vert’ (green) and ‘nom’ (name) or from the Gallic ‘verno’ (alder).

First, a little history.  In 1050, Richard de Reviers, an officer in the army of William the Bastard, Duke of Normandy, was granted title to the town in gratitude for his loyal service.  He and all his descendants subsequently took the name of Vernon as their own.

In 1066, the newly named Richard of Vernon fought alongside the Duke of Normandy (William the Conqueror) at the Battle of Hastings and settled in Britain.  Some of this branch of the family later moved to America where, among other places, Mount Vernon is named after them.

While the French branch of the Vernon family produced Saint Adjutor, patron saint of sailors and the nobility, the British branch flourished and produced a dynasty of admirals and other senior naval officers.  The most famous of these was Admiral Edward Vernon (1684-1757). On 22 Nov 1739, he achieved fame by commanding a squadron of six ships which captured the Central American coastal fortress of Portobello from the Spanish. 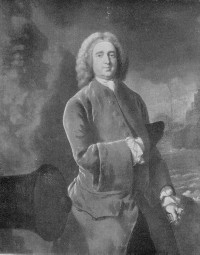 Although he suffered a later defeat at Cartagena, he was elected to Parliament on the basis of his previous success.  He was known as ‘Old Grog,’ reputedly because of his penchant for wearing a cloak made of grogram (from the French ‘gros grain’), a coarse fabric of silk or mohair and wool.  In 1740, he had the sailors’ neat rum ration diluted with water, a mixture known ever afterwards as ‘grog.’  Most notably for us, Edward Vernon's name is associated with HMS Vernon, the base for TON Class ships of the Vernon Squadron and later, the Second MCM Squadron.  HMS Vernon was actually named after the Hon George Vernon, a later member of the family.  Nonetheless, it adopted the same motto as the town of Vernon and the Vernon family: "Vernon Semper Viret".  The literal translation of this is "Vernon Forever Green" but a more realistic translation would be "Vernon Will Always Flourish".

As a Minewarfare & Clearance Diving officer, I watched the massive millennium development taking place on the site of my former alma mater, HMS Vernon, with a touch of sadness and not a little nostalgia.  I was a newly promoted sub-lieutenant when I first entered the gates of Vernon in early 1973 to join HMS Laleston as her Navigating Officer.  This was half a century after the torpedo school of the original HMS Vernon, occupying three hulks in Portsmouth harbour, had moved into more permanent accommodation ashore.  In the following years, I spent many of my happiest times in ships based at HMS Vernon (or "at the Vernon" as traditionalists would say), on courses and on the staff of this most friendly of naval establishments.

The constant comings and goings of ships and their men kept the atmosphere in the various messes fresh and alive with tales of storms weathered, places visited, operations achieved and the distinctive taste of salt water and dieso.  HMS Vernon was full of character itself, maintained by a stream of colourful individuals whether they were the ever ingenious engineers of the Portsmouth Craft Group (PCG), stalwarts of the TASIs’ (now ASWI's) Club, clearance divers establishing world records for deep saturation diving, members of the newly formed minewarfare sub-branch or the ships’ companies of visiting ships.  There always seemed to be a gin pendant flying somewhere on the waterfront. 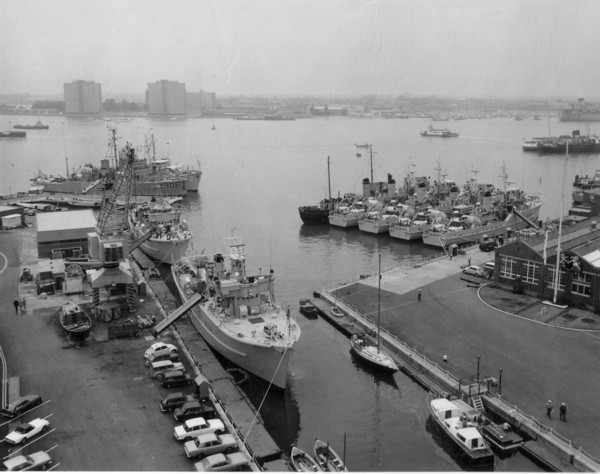 Among my more vivid memories of Vernon are: the RNR VERMEXes (and parties) during which HMS Kilmorey, the Northern Ireland RNR tender, could be identified by the number of empty Guinness bottles floating around her in the Creek; the first two Round the World Yacht races which started and ended at HMS Vernon (yet more parties); the ‘away all boats’ during the annual visit by the girls of Roedean school (part of HMS Vernon had been evacuated there during the Second World War and, to the delight of evacuees, bell pushes in the dormitories were labelled "Ring for Mistress"); the annual competitions for the Bone of Contention against HMS Dolphin across the water and the Olympiad against HMS Excellent just up the road at Whale Island.  Not least, of course, were the christenings of all three of my children in the diving helmet font in the little chapel dedicated to St Adjutor and the departmental and ships’ Sundays celebrated in the chapel with drinks and lunch in the Vernon Club afterwards.

There had been a liaison between HMS Vernon and the British branch of the Vernon family for several years but in 1973, it was decided to pay a ‘ship’s visit’ to the ancestral home in France.  At the time, three inshore minesweepers (HMS Flintham, HMS Dittisham and HMS Isis) were attached to HMS Vernon for training purposes and it was decided to use them for the occasion.  They were manned with volunteers from HMS Vernon’s ship’s company, most of whom were fairly mature officers and senior rates. The Captain (Robert Browning) embarked in HMS Flintham, the Commander (John Jacobsen) embarked in HMS Dittisham and I embarked in HMS Isis with Vernon's Waterfront Officer (Doug Barlow).  The rest of our wardroom in Isis comprised the Barrackmaster (Dave Kirby, a Shipwright Officer), the Padre (Trevor Lynn) and the chapel organist (Denis Thornley, a short, rotund and jolly civilian of advancing years who worked at ASWE and played the piano in the Thatched House pub at Northend after Sunday services).  For good measure, Dennis brought his piano accordion with him.

We sailed one fine Autumn Friday afternoon and formed up to make an overnight passage across the Channel to Le Havre.  On the Saturday morning, with pilots embarked, we commenced the slow passage along the River Seine as it snaked its way through Normandy.  At Rouen, we stopped to pass through the locks and I remember desperate sailors leaping ashore to buy cigarettes before the ships recommenced their passage. 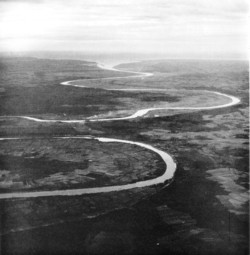 The River Seine and its estuary

We reached Vernon-sur-Seine in the early evening and passed under its low bridge before securing to some tree trunks on the steeply sloping grassed river bank across from the town.  We were greeted royally by the town’s civic officials and some WRNS officers and wives who had flown over to be accommodated in the main hotel.

That evening, we hosted the town’s dignitaries to an upper deck cocktail party on the forecastles of two of the inshore minesweepers berthed alongside each other.  Dennis, the chapel organist, started off formally enough by playing romantic Parisian airs on his piano accordion but as the evening wore on and the gin and tonics started taking their effect, the musical entertainment became more lively and he launched into the Lambeth Walk and the Hokey Cokey.

The forecastle of an inshore minesweeper is not the roomiest of spaces for energetic dancing as Commander(U)’s delightful wife found out.  She lost her footing and fell heavily, breaking her leg. Apologising profusely, she was whisked off with her husband to the hospital and the party carried on.  When the party finished, the naval visitors (save for the duty part of the watch) were invited ashore for dinner by the townspeople.  Officers and their wives were treated to a feast in the banqueting hall of the main hotel and there was much imbibing of the locally produced Calvados, a type of apple brandy which normally serves as a liqueur but, in this region, is drunk by the bucketful.

The following morning, those still capable took the opportunity to look around the picturesque town and bought the inevitable postcards.  At midday, there was an all-ranks civic reception provided in the Hotel de Ville (Town Hall) with food and alcoholic refreshments including more Calvados.

Following this rather liquid civic reception, a coach arrived to take those interested to spend the rest of the day in Paris so there was a move back across the river to the ships to enable personnel to shift into plain clothes.  Most of the ratings chose to remain in rig. Since I had demonstrated a smattering of schoolboy French, I was nominated as interpreter and tasked to organise the party of, by now, quite merry naval personnel. I remember sitting in the front of the coach overlooking the ships as an inebriated CPO from PCG tried vainly to scrabble up the grassy slope to the road rather in the manner of a fly trying to climb up the inside of a slippery jam jar.  In a flash, two duty sailors dashed out from the ships, retrieved his fallen cap, picked him up between them and sympathetically helped him back on board suggesting it might be better if he skipped this run.

Five minutes later, we set off for Paris with me providing a running commentary over the PA system whereupon half the sailors promptly fell asleep.  Two of the sailors had persuaded Dennis, the chapel organist, to bring along his piano accordion.  They had the notion that, if they visited pubs and Dennis played his instrument, they would be offered free wets as buskers’ perks.

After an hour or so, we were delivered to Montmartre in Paris and dropped off near the Moulin Rouge with instructions to rendezvous that evening at the Eiffel Tower for the return trip.  My own group did a little shopping and sightseeing, had a meal and gradually wended our way towards the Eiffel Tower where we arrived on time for the return trip. 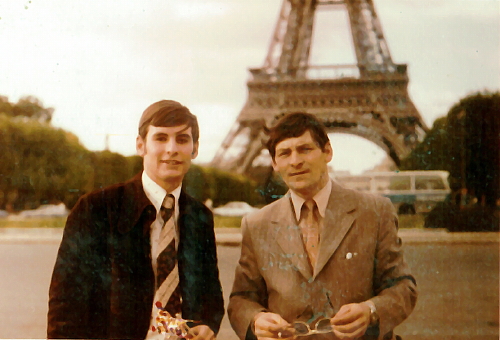 The author with the CO of TS Vernon Sea Cadets

Unfortunately, while everyone else had turned up, there was no sign of Dennis or his piano accordion.  On quizzing the two sailors who had accompanied him, it turned out they had started off hopefully at a bar called the Trafalgar but somehow the locals had not taken kindly to the idea of two British sailors cadging drinks while their companion played songs from the Fleet Air Arm songbook on a piano accordion.  They had tried again in a couple of other bars without success and then decided to abandon the rotund and far from youthful Dennis, with his piano accordion, in the centre of Paris.

Dennis spoke no French and had never been further from Portsmouth than the Isle of Wight in his life.  We were, therefore, quite worried by his non-appearance and were thinking of organising search parties and informing the police when, some 15 minutes later, we spotted a small red-faced figure in the distance waving his arms desperately as he ran puffing and panting towards us with his heavy piano accordion bouncing up and down on his shoulder.  I shall not repeat the words he had for the two sailors who had left him to fend for himself in the middle of a foreign city but they did include one of William the Conqueror’s titles.

As we left, I discovered that four or five sailors in the back of the coach had slept through the entire visit so I had them shaken, just to convince them that they had actually made it to the "City of Light" before we set off back to Vernon-sur-Seine.  The rest of the trip was uneventful and we sailed the following morning for the return passage back down the Seine and across the Channel to the other Vernon in Portsmouth.  Old links had been reinforced and new friendships had been made.

The following year, I was the liaison officer for a return visit to HMS Vernon by the Mayor (with his charming daughter Dominique) and some of the citizens of Vernon-sur-Seine.  But that is another story.