(First published in the May 1990 (No 24) issue of Ton Talk, the magazine of the Ton Class Association)

I daresay most readers will have experienced or read about ‘Stan’s Navy’.  For the uninitiated, this term of endearment was given to the Standing Naval Force Channel (STANAVFORCHAN), NATO’s international force of mine countermeasures vessels (MCMVs) created on 11 May 1973.  STANAVFORCHAN was a bit of a mouthful so in common parlance it was abbreviated to ‘Stan’s Navy’.  By default, the Commander of the Force became ‘Stan’.  He probably should have been known as ‘Little Stan’ to distinguish him from his big brother the Commander of the frigates and destroyers of the Standing Naval Force Atlantic (STANAVFORLANT).

Stan’s Navy operated mostly in Northern European waters.  Throughout its existence, the force provided a deterrent against Warsaw Pact aggression, particularly mining.  It normally comprised MCMVs from the UK, the Netherlands and Belgium with regular participation by ships from West Germany, Denmark and on one occasion the USA.  Individual nations’ ships usually rotated every six months and Command of the force rotated annually between the UK, Netherlands and Belgium.  Operational Command was exercised by the Commander-in-Chief Channel at Northwood (CINCFLEET with a different hat) although each country retained Full Command of its vessels.  The force succeeded admirably as a demonstration of NATO unity and commitment and provided the opportunity for us to work with and learn from our Allies.  It was also a lot of fun for its participants.

My own introduction to Stan’s Navy came in 1977 while I was serving in HMS Wilton.  In preparation for joining the force, we had read the huge number of signals, orders and publications associated with NATO operations and thanked our lucky stars that everyone worked in English.  On the one occasion when our ships’ command teams were briefed in French (the other NATO language) prior to an exercise off Lorient, it was a German officer who stood up in the auditorium and interrupted the French exercise planner in the middle of his brief and said, “Will you please give the briefing in English because we cannot understand one damn word you are saying!”   His statement was greeted by thunderous applause from the assembled Germans, Dutch, Belgians and Danes and an embarrassed silence from us Brits.

I digress but this reflects the indelible impression made by life in ‘Stan’s Navy’; one cannot help but recall such vignettes as vividly as if they happened yesterday.  The international make-up of the force added immensely to the quality of life and the generosity and hospitality of the ships’ companies towards each other was unexcelled although there was keen inter-ship rivalry.  During our period with the force, the other ships included HNLMS Onbevreesd, HNLMS Sittard, BNS Bovesse and FGS Ulm which was relieved halfway through by FGS Wolfsburg.  We were also joined by the Danish minesweepers Omosund and Ulvesund while operating in the Baltic.

We joined Stan’s Navy at sea off the Netherlands.  The force commander at the time was a Dutchman embarked in HNLMS Onbevreesd, an ex-USN MSO.  Sufficient time has probably passed by now for me to reveal that he was known throughout the force as ‘The Pink Panther’ on account of his tippy-toed style of walking and certain other mannerisms.  I can also reveal that my Captain, a somewhat mischievous individual, managed to convince him that the insult of "Up your nose” was in fact a perfectly acceptable British greeting.  From then on, every time they encountered each other my Captain would cheerfully say, “Up your nose, Sir,” to which the force commander would laughingly respond, “Up your nose too, Jim.”  Again, I digress.

Almost immediately we found ourselves involved in a formation double Oropesa minesweeping exercise.  At first we could not understand why, using standard NATO methods in accordance with the Allied Tactical Publication (ATP), the Flag Romeo we used for signalling the different phases of streaming and recovering the sweep was always doing something different from those in the other ships.  Then we had our first revelation about ‘Stan’s Navy’.  If there was a NATO way of doing things, Stan’s went one better and had its own version of the NATO method to test improvements in the original.  Once we had hoisted this in, life became a lot easier and we used Stan’s books from then on.  Within days, we were all thinking along the same lines and orders and directives became almost superfluous as ships turned up at the right time fully prepared for the intended serial.

We were kept on our toes with plenty of exercises on passage and weapon training between port visits and exercises.  During this period, many personnel took advantage of the ‘Crosspol’ scheme that allowed them to swap ships for a few days and experience life in a different navy although I was unable to take advantage of this myself.

Port visits were invariably enjoyed between passages and exercises and each naval base welcomed all the ships, regardless of nationality.  Such times also provided scope for ‘Up Homers’ with friends from the host nation’s ship.  In this fashion, we visited Den Helder, Vlissingen (Flushing), Ostend, Lorient, Cherbourg, Le Havre and Bordeaux on the Atlantic seaboard as well as Hamburg, Kiel, Olpenitz, Aalborg, Arhus, Flensburg, Korsoer, Copenhagen and Neustadt in the Baltic.  By finding over 20 mines in Exercise Blue Harrier, we also clinched the squadron efficiency trophy.

Apart from the hectic exercise schedule, we also had to cope with the social scene.  For example, whenever we were alongside on Thursday, the Dutch put on a traditional ‘ricetable’ to which all were welcome.  They also held movie nights and usually had the latest British and American films.  I had trouble watching these because the soundtracks were in English but the subtitles were in Dutch and it is amazing how distracting this can be.  I was forever trying to figure out the meaning of “Grootvering das bakensihaveg” (or something like that) while completely losing track of the plot.  Another thing that took some getting used to was the ‘grat issue’ of wine enjoyed by the Belgians.  Like French ships, the Belgians had tanks for fresh water, fuel and… plonk.  The Belgians also had Jupiler beer and I felt a degree of trepidation whenever I boarded their ship to borrow a chart or discuss the next R/V because I inevitably ended up sitting with their officers in the mess looking at a growing collection of empty bottles while wondering why on earth I’d come onboard.  The Commanding Officer of Bovesse was a prime offender with this misplaced generosity and became responsible for many a lost afternoon.

I remember a particular incident while the force was visiting Falmouth.  Late one evening, I was entertaining some old friends in Wilton’s wardroom.  They were just remarking that the ship seemed to lack the sense of fun prevalent in Laleston during one of my previous visits when the door burst open and in marched five characters on their knees, all wearing false noses and moustaches and singing, “Hi Ho, Hi, Ho.  It’s off to work we go…”.  My astonished guests asked, “Who are they?”  “Oh,” I said.  “Those are the COs back from their run ashore.”  Sure enough, it was my own Captain leading his Dutch, German and Belgian counterparts in the famous chorus from Snow White and the Seven Dwarfs.  Our time in Stan’s Navy was peppered with incidents like this and seemed to pass all too quickly.  I still have a photograph of the Belgian Tug o’ War team digging in their end of the rope with the aid of a boat’s anchor during one of the many inter-ship sports events. 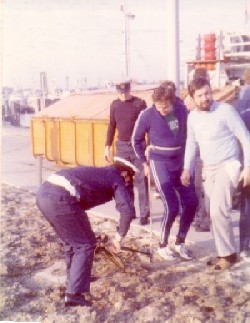 Belgians get stuck in

One day, the Force Commander decided it would be a good idea to muster all his Commanding Officers on the jetty for a final leaving harbour brief prior to sailing.  The First Lieutenants then decided they should all have a meeting on the jetty too.  Not wishing to be left out, the Navigating Officers decided they should also meet on the jetty.  Before too long, there were more people on the jetty than on the ships and it all got a bit silly before the Force Commander decided that the leaving harbour intentions signal sent out the night before sailing was probably sufficient to meet everybody's needs.

Our penultimate visit with the force was to the naval base at Rosyth in Scotland and I was nominated as the visit liaison officer.  The timing meant that all of the Continentals were missing their Oktoberfest carnivals and bierfests at home so I decided to put this right by organising our own Oktoberfest in the form of a fancy dress dance.  Our LOGREQ included requests for 150 unattached young ladies in fancy dress (unthinkable in these politically correct days, I know), a dance hall, disco, band and bar facilities.  On our arrival, I had to do a bit of negotiating with the local Provost to sort out alcohol licences, a bar extension and so on but, amazingly, it all happened on the night.  This was mainly thanks to the efforts of the visit liaison team at Rosyth which included Lt Vic Barrie RN assisted by Third Officer Jill Corbett WRNS who was the Minewarfare Exercise Analysis Officer on Captain MCM’s staff.  Between them, they visited all the local airlines, car hire firms, telephone exchanges and hotels to round up female guests for the night.  Each ship contributed national dishes for the buffet and the evening was a resounding success.  What was most gratifying was the total lack of friction between nationalities but this was yet another hallmark of life in Stan’s Navy.

After weapon training in the Forth (Oh, happy hunting ground!), our final visit was to Aberdeen where we were due to leave Stan’s Navy and head home to Portsmouth for our annual inspection by MCM2 and the Queen’s Silver Jubilee Review at Spithead.  On the morning of our departure, our upper deck parties were dressed in full foul weather gear and armed with charged hoses.  Buckets of potatoes (some containing thunder-flashes) water-filled balloons and other missiles were ready to hand.  We were not only expecting the normal riotous send-off but also a certain amount of revenge.  The previous night, the Buffer and I had donned diving suits and daubed ‘Wilton Was Here!’ in red letters on the bow of each of the other ships except the German one whose quartermaster had spotted us and politely asked us to desist.  As we slipped and made a sternboard, the air was filled with ‘incoming’ and ‘outgoing’.  The sky was rent by the distinctive sound of German whiz-bangs resembling aerial Chinese firecrackers and the distance gradually opened.  What we had not anticipated, however, was the CS gas canister that landed just outside the Machinery Control Room ventilation intake.  Desperate measures were called for and I delivered two respirators to a grateful Chief of the Boat and his POMEM while they struggled to obey engine orders as the ship manoeuvred in the tight confines of Aberdeen harbour,

After this action, it took the entire passage to Portsmouth to clean up the ship ready for our inspection but it was worth it.  We left many friends behind us but saw many of them again on later occasions in various ships and shore establishments.  I know I am not alone in regarding my time with Stan’s Navy as among the most enjoyable I have ever experienced.

MAY THE FORCE BE WITH YOU!